The new standard of eddy current structure test for production and laboratory. 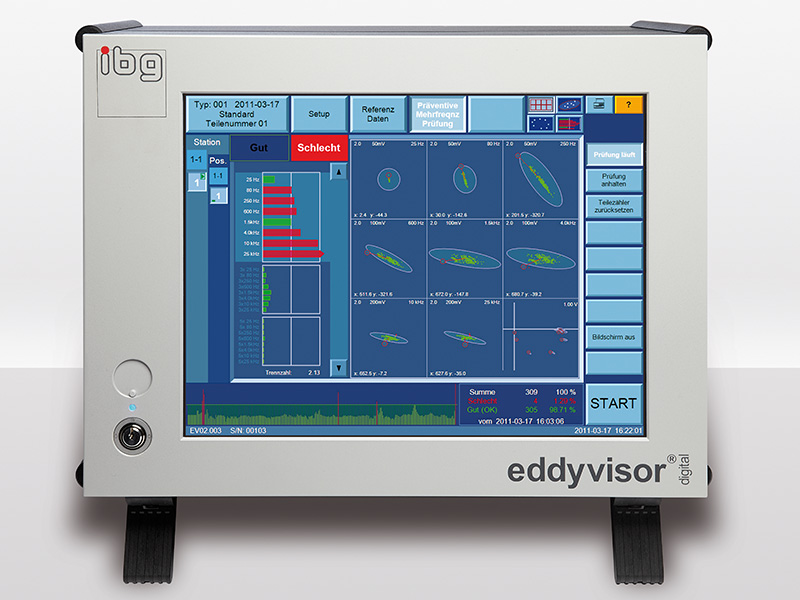 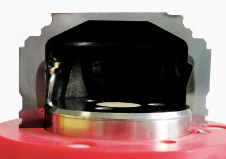 ID coil for structure test on a contiuous velocity joint for correct case depth and position of hardness zone.

A difficult problem for in process inspection of mass parts is supervision of heat treatment results. Verification of features like correct case depth and hardness are of prime importance for meeting the quality standards of the final product. These features can be monitored by destructive methods like sampling but with concurrent high personnel and financial effort. Moreover, a sampling inspection is sensible for statistically distributed defects only. During heat treat processes in furnaces or induction hardening, accidents involving single parts and that violate statistical distribution laws happen. These “unexpected” defects can be missed by sampling. 100% testing is required to reliably detect them.

Setting of the instrument is done with good parts only. Ten to 20 parts are presented to the instrument, and tolerance zones are formed automatically. Eddy current signals from subsequent parts are now compared with these good parts. That means that no artificial defects are required for calibration, only known good parts. Due to the high test speed and the easy setup a new test task is ready to start within shortest time. Another advantage is the multi-dimensional analysis of ibg test instruments. An individual tolerance zone is formed for each test frequency. If all tolerance zones are satisfied, one can assume that the tested part is okay. Even one single not satisfied tolerance zone classifies the part as not good.

Eddy current tests are always comparative tests with yes/no answer. Very small deviations in the group of parts can be detected. Eddy current cannot answer why there is a deviation. In case of a bad part another test is recommended like metallurgical methods to inspect the structure (cut) or a classic hardness test.

Fixture for eddy current structure test in the laboratory.

Harmonics occur by each hysteresis of the magnetisation curve of a test part in the coil arrangement. The sinusoidal current in the exciter coil leads to a sinusoidal field strength which induces a magnetic flux in the test part. Its chronological sequence, however, is (depending on formation of permeability) not sinusoidal anymore. Therefore the sequence of the magnetic flux in the receiver coil induces a distorted voltage, deviating from the real sine even at small field strengths. The fundamental waves, having been distorted by hysteresis, contain higher frequency harmonics. Fourier analysis of the distorted fundamental waves reveals the higher frequency harmonics, more precisely harmonics of the 3, 5, 7 or 9 times frequency. The analysis of these harmonics supplies a more detailed view of the magnetic features of the part and thus more exact information on the formation of microstructure. In addition, it offers significant advantages when suppressing interferences like batch scattering, part geometry and part temperature or positioning effects. Harmonic signals are very small. That’s why immense electronic effort is needed in order to distinguish them from the basic noise. Such small signals can be detected clearly and processed robustly by ibg’s unique digital eddyvisor instrument family.

An essential innovation is iSHA (ibg’s Simultaneous Harmonic Analysis) – combined with ibg’s PMFT it guarantees highest possible test reliability. It enables simultaneous calculation of vectors of the fundamental wave at eight frequencies and of two harmonics without extension of test time. It additionally uses high frequencies and their harmonics for a better solution of even smallest structure differences. Thus iSHA greatly enlarges the possibilities of the well-known Preventive Multi-Frequency Technology.

NEW: Temperature adaptive structure test iTAS
Eddy current testing is based upon the electric conductivity and the magnetic permeability characterising the material to be tested. Different materials and microstructures have different conductivities and permeabilities that are detectible by eddy current. However, both properties also show a temperature dependency. Electric conductivity decreases by 4% per 10°C. Variations of ambient temperature are compensated by ibg by means of the differential coil principle. Test coil is compensated by a separate compensation coil giving a differential test.
However, test parts are often heated up by production processes and cool down during pauses of production. Thus they have different temperatures when tested. This leads to an erroneous NG sorting. 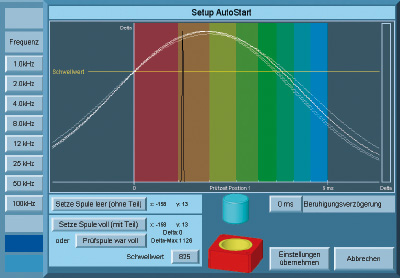 New: our new AutoStart allows an even faster and more precise start of the structure test than before. The graphic interface makes it very easy to adjust the AutoStart for quick and also for dynamic testing. 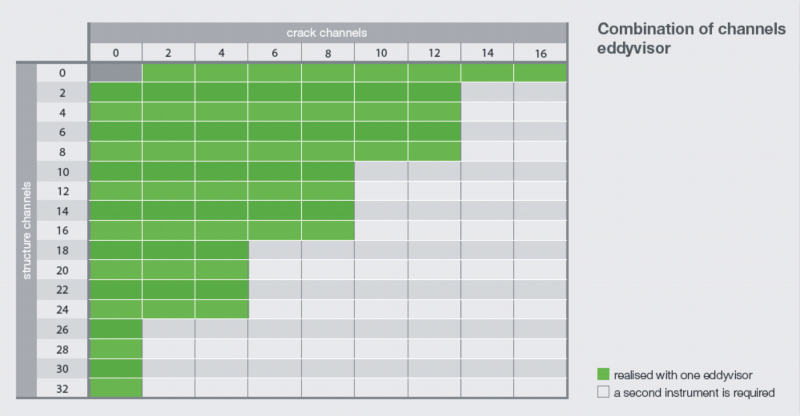 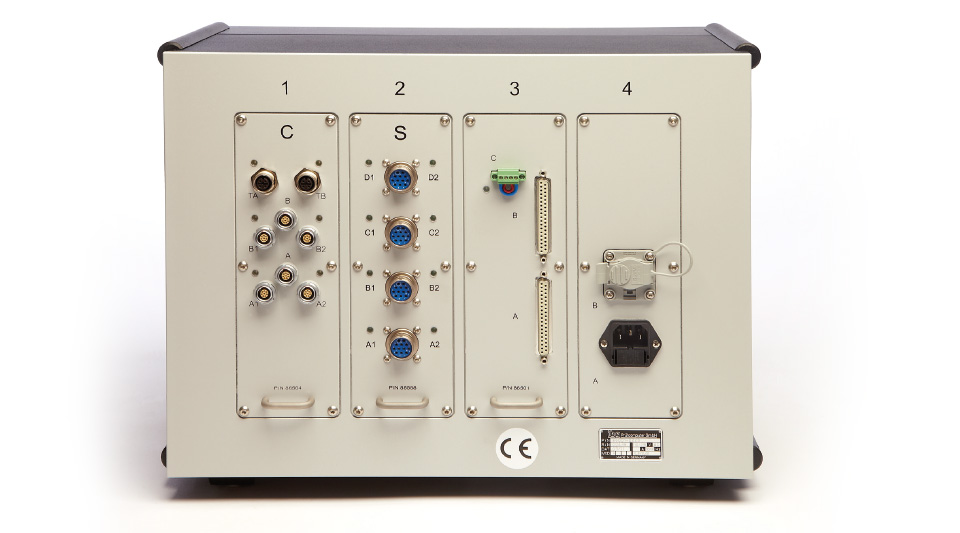