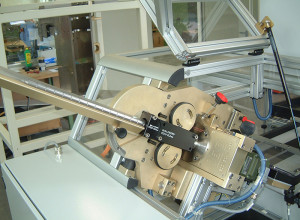 The eddy current test method has established itself for years with 100% crack detection of cylindrical parts. Main reasons are the always reproducible and non-destructive method as well as the excellent chance of automation of that test. Rotating systems increase the productivity tremendously.

Eddy current crack detection requires a relative movement of test piece surface to crack detection probe. When a crack or pore passes the sensitive area of the probe the test instrument shows the relating signal. Usually the rotational-symmetrical test part is rotated while the crack detection probe tests the zone of interest. The advantages of that method are flexible use and rather simple mechanical effort. 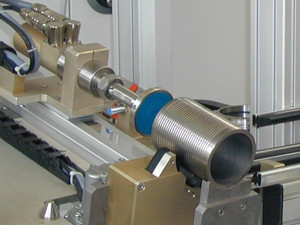 Another way is rotation of the probe whilst the test piece is stationary. Geometry flexibility suffers as a result but provides enormous advantages with regard to test time. Test machines with rotating systems keep up with the preceding production lines without any problem resp. exceed them as the probes can be turned with 3000 rpm and more.

So-called rotating heads are applied. That means, the probe is integrated in a rotating disk mounted onto a rotor. A rotational transformer, which is the heart of that technology, transfers the undistorted signals from the probe to the crack detection instrument.

Rotating heads are well suited for testing rotational-symmetrical and cylindrical pieces, like a string of bearing rollers, piston rods, pinion pins and so on, whose outer diameters are scanned for surface open defects. Cylinder liners are also an application (individual or in the motor block) and all other kinds of boreholes whose inner diameter must be tested for cracks. 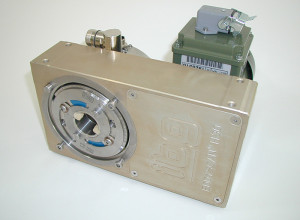 Ibg offers the rotating head family eddyscan which has been developed specially for the demanding applications in the automobile industry. 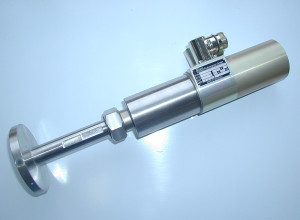 The eddyscan F is applied as one or two channel device for testing cylindrical inner diameters of boreholes, cylinder liners or bearing rings for cracks. Special designs may even test conical surfaces. The diameter range starts at approx. 3mm with no limits upwards.

The eddyscan C is a development specially for motor block testing. A self-centring crack detection probe scans the cylinder liners for cracks and pores whereupon an X-Y-slide balances the dimensional and position tolerances of the cylinder boreholes.

All rotating heads are equipped either with fixed probe disks or diameter adjustable disks. Most of the ibg crack detection probe types can be used in the probe disks so that the test equipment is always perfectly arranged for the particular test task. 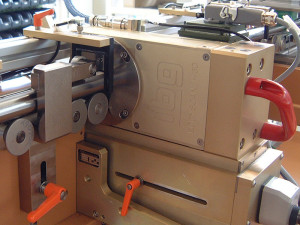 eddyscan H assembled on height adjusteable slide, with an external guidance for the test of round steel bars